Fly Fishing the River that Runs Through it

Blackfoot River fly fishing trips with our Montana fly fishing guides are a classic freestone experience, on one of Montana’s most scenic rivers. The Blackfoot River was the inspiration for Norman Maclean’s classic novella-turned-movie “A River Runs Through It” and it continues to inspire anglers to this day with its fantastic fly fishing for wild trout, rugged canyon walls, and thick hatches all season long.

The “Big” Blackfoot River runs west of the continental divide, just a short drive over Roger’s Pass from the Missouri River and Craig, MT and is a great contrast to the technical tailwater fly fishing found on the other side. The river courses through a high river valley from its headwaters in the Bob Marshall Wilderness, through Lincoln, and onto its eventual confluence with the Clark Fork River. Along its course the Blackfoot River is lined with tall Ponderosa Pines, cuts through deep canyons, and offers a truly unforgettable float trip experience, perfect for seasoned and beginner anglers alike. 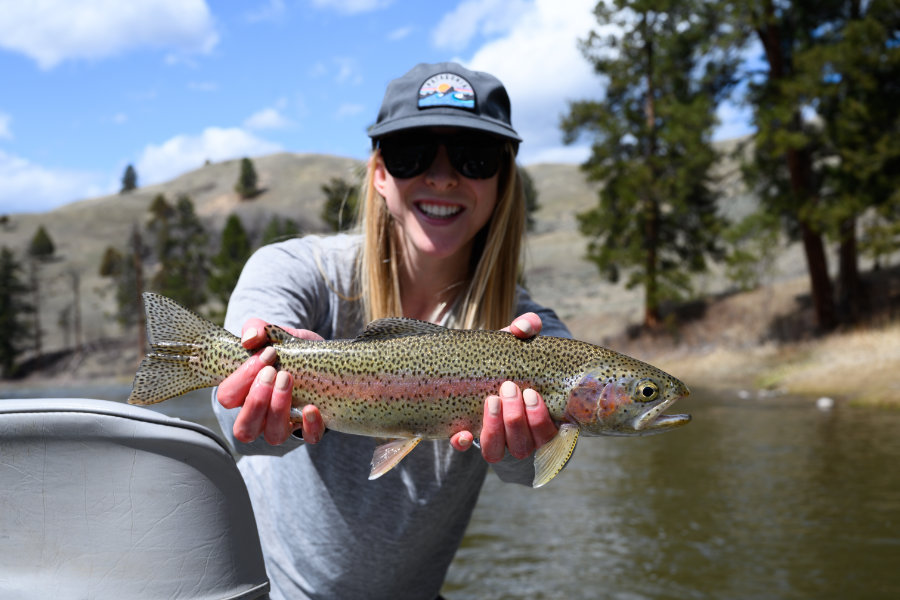 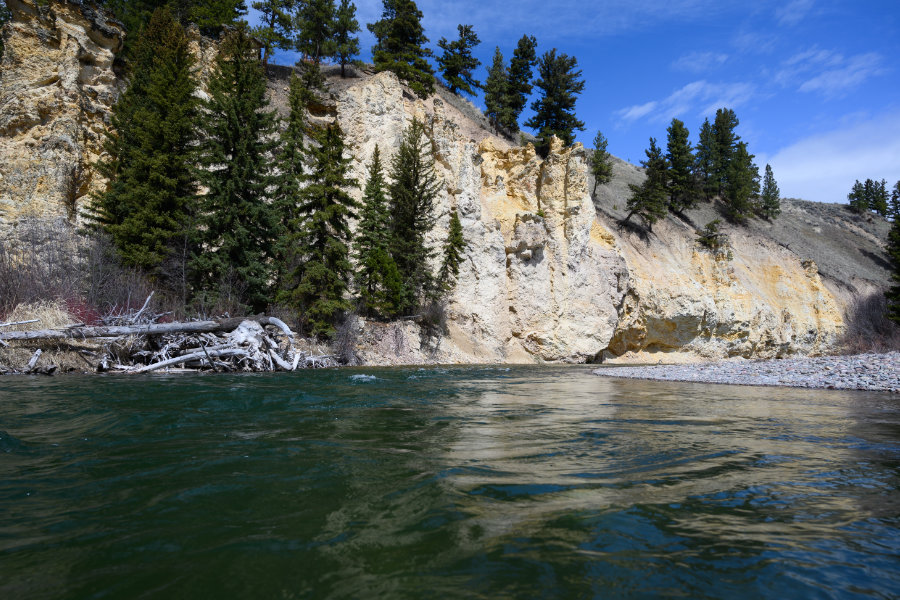 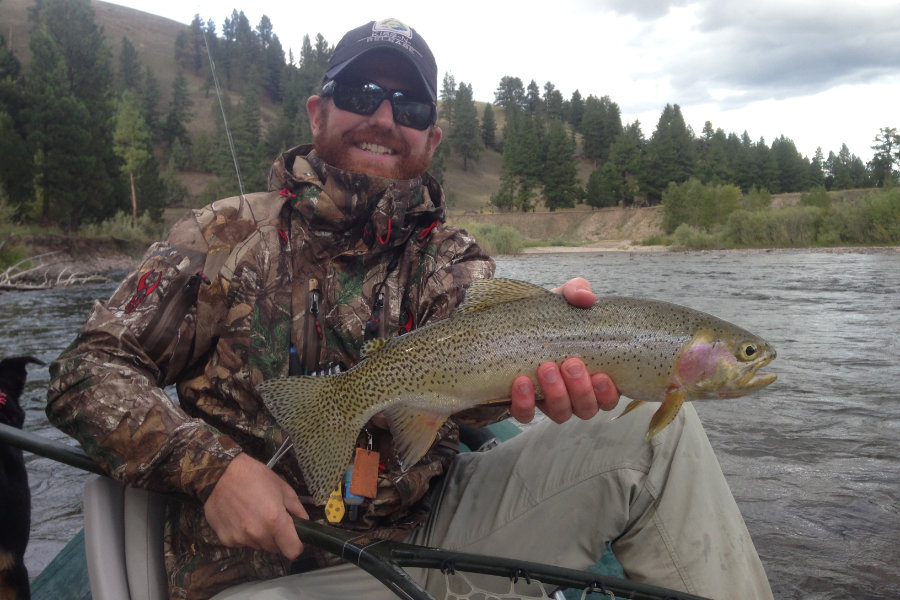 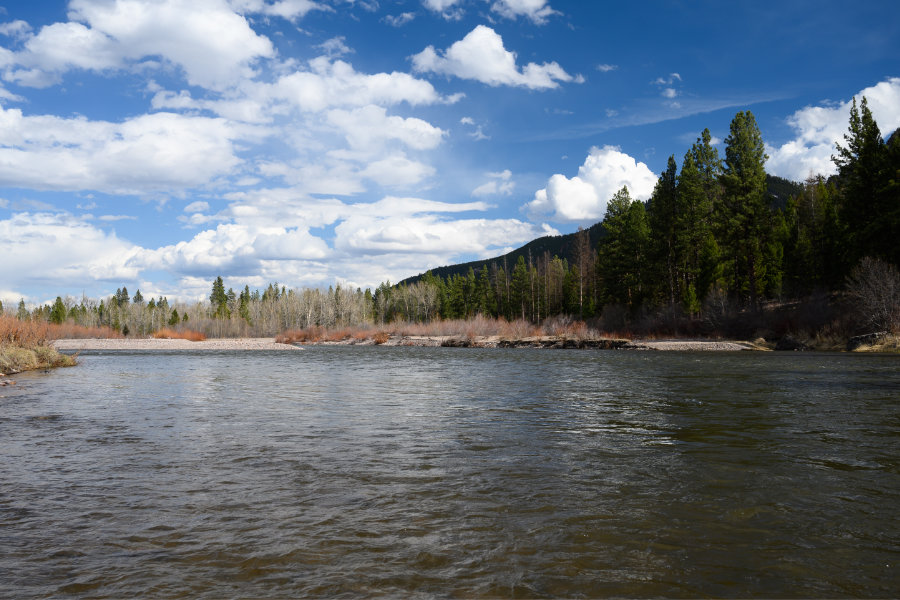 Large rainbow trout and brown trout also thrive in the Blackfoot River and tend to show themselves during the thick hatches of stoneflies in the Summer and when streamer fly fishing is great early and late in the season. Native Bull Trout are often caught as a by-product of streamer fly fishing, but are an endangered species that we do not target. These fish are a shadow of the past that are worth protecting.

We consider the Blackfoot River to be primarily a dry fly fishery, and our Montana fly fishing guides fish it accordingly. The cutthroat, rainbow, and brown trout in the Blackfoot River are seemingly always willing to rise for well-presented flies during our fly fishing season. Single-dry and dry-dropper are our preferred tactics but anglers hoping to catch the largest of trout often times will change over to streamers. The swift waters and rocky banks make for often non-stop action.

The fly fishing season on the Blackfoot River runs from April-October. We consider primetime to be mid-June through mid-September. Anglers can expect consistent hatches of stoneflies, mayflies, caddisflies, and terrestrials throughout the season. The annual salmonfly hatch on the Blackfoot River begins in mid-late June shortly after spring run-off subsides and is some of the most exciting fly fishing of the year.

Missouri River, Dearborn River, and Land of the Giants

My wife and I had a wonderful experience fishing with Montana Angling Company. Max was able to teach my wife to fly fish from scratch and she caught 5-10 really nice 18-20” fish her first time! He was very patient and knowledgeable. Thank you for such an amazing day! I would highly recommend beginners to advanced fly fishermen and women.

Max is the perfect guide and teacher. My wife and I are newly retired and wanted to try fly fishing for the first time. We learned tons and caught lots of trout float and wade fishing. Can't wait to come back for our sophomore course. Thanks Max and Peter.

I've been guided by Max and his guides on the Yellowstone, Madison, and Missouri rivers and have had a blast every time. Their guides are knowledgeable, respectful, and patient--even when I tangle my line. The Montana Angling Co is a great choice whether it's your first time fly fishing or you're a seasoned pro--these guys know where the fish are and what they're hungry for.

Max’s professional demeanor, unmatched knowledge of fly fishing, and top rate gear combine to make any guided trip with him a special experience. Regardless of your ability or experience, you will not only catch fish, but you will have an excellent time as well.

I have fished with guides across the United States and South America, and can say with confidence that Max's patience, passion, and knowledge of fishing are second to none. Whether you are an expert angler or fishing for the first time, Max is the guy you want to have in your boat.

We had an awesome experience with Montana Angling Co. Max worked with us to make sure we had the perfect day to go fishing. Our guide was Guy Flynn, and he was great. He was very patient with us and we enjoyed the conversation. He was putting us on fish all day long. Overall, we had a great experience, and I will definitely use Max's company again on our next trip to Montana.